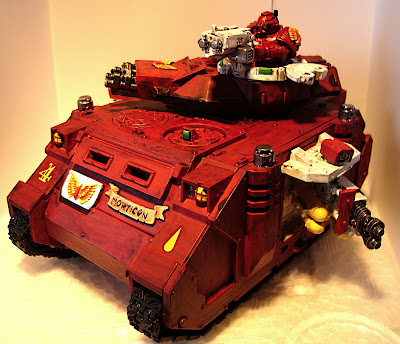 Over at the FTW network there is currently a series of what must have unit we always have in our army list. Not the type of unit we put onto the table because the Codex says we have to, but the type of unit we simply like too much to leave it at home.
Well, from the intro picture my choice is obvious: it’s the Baal Predator, of course. On the one hand, the Baal Predator is very fluffy as it’s a unique Blood Angels’ build that isn’t mimicked by the Ultramarines yet (see e.g. Vanguard Veterans or Ironclad Dreadnoughts).
On the other hand, the Baal Predator is a fairly devastating weapon: it’s twinlinked Assault Canons fire with a high and reliable accuracy and the Rending rule even allows them to crack a Land Raider with a little bit of luck. If you add Heavy Bolter side sponsons, you pump out quite a few shots in every turn, especially if the Overcharged Engines throw is successful and the Baal moves and fires all weapons.
I for my part don’t use Heavy Bolters, however, as nothing screams “Assault!” more than Heavy Flamer side sponsons. Yes, Heavy Bolters are indefinitely better because you can fire them all game and not just in the last round when you closed in on the enemy (or not at all if the Baal explodes while getting there). However, Blood Angels are a close combat army and I think nothing’s cooler than tanks scorching everything before the Rhinos with the infantry arrive. Plus my fellow Tyranid player has a huuuge respect from my Heavy Flamers, so even the better.
Of course, the Heavy Flamer loadout has one huge drawback: distance. My default setup is filling the three Heavy Support slots with two Baal Predators (both with Heavy Flamers) and one Vindicator meaning that my thread bubble is limited to 24″ of firing range. Especially when I play against Imperial Guard or other tank heavy lists this is a real problem as my tanks tend to die before they do any real damage. Furthermore, using Heavy Flamers in a turn automatically means that the tank will get charged in the next turn, so you better make sure you always drive minimally 6″ far.
In conclusion, one can say that my must have pick is mostly based on fluff and style reasons rather than pure power. However, rumors go through the WWW that in the new Blood Angels Codex Games Workshop makes taking Heavy Flamers worth their points again…