The rise of Mephiston 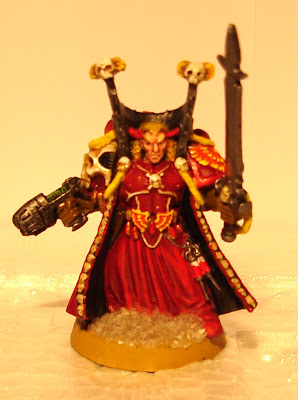 Back in 4th Edition, Chaplain Lemartes and Chief Librarian Mephiston were THE power combo as Mephiston all by himself was a one man army. With the nerf of the Feel No Pain rule in 5th Edition that changed into favoring the Dante/Corbulo combo as they let nearby units benefit from their skills. Mephiston became overcosted and rather feeble with no Invulnerable Save.
However, I get the feeling that Mephiston is coming back as psychers are getting increasingly popular again. Everyone knows the Chaos Lash. The Psychic Choir of the Imperial Guard really hurts you as your models will run off the table after minor losses. With the new Space Wolves Codex and their psychic powers everybody will play Njal Stormcaller and his brothers.
In the midst of all of this, Mephiston still has his Psychic Hood with an unlimited range and Leadership 10 giving him the best stats to nullify the enemy’s sorcery. Yes, you can also protect your troops against the enemy’s spells by putting them into transports, but at least in my case my Rhinos always break while the enemy’s remain intact.  Furthermore, Mephiston still has this aura of invincibility from former days that makes other players go “Yikes, there’s Mephiston!”
Overhere, we usually play with a 1750 limit which makes you think twice if you want to put 300 points on the table for Dante and Corbulo. I rather limit myself to one HQ and bring in more Attack Bikes and/or Land Speeders instead to increase the number of Melta weapons. That’s why I usually run Lemartes (Corbulo alone usually doesn’t do any good as there are too many conditions to be met to make him bring out his full potential), but lately I have made good experiences with deepstriking my Death Company behind enemy lines. Usually, I minimize my DC, so if they die immediately, they are still a nice distraction for the other player. If he decides to ignore them and let them run havoc within his ranks even the better. So, there’s the open slot for Mephiston – he’ll see a lot lore game time in my near future. And then we’ll see what happens with him in the new Codex.
Posted by Unknown at 12:01