I recently started a new wargame, Dystopian Wars. Why did I do that? Well, I watched two guys playing at my FLGS and came to these conclusions:

Did I mention the game is a good value? The starterbox not only contains the models, but also the necessary templates and markers. (Privateer Press, are you listening?) Also, it contains one large ship, three medium sized ships, ten small ships, and then a whole bunch of airplanes. This is not a warlock with two warbeasts that stays fun for five games - this will give you unique games for weeks and months.

Did I mention the models are quick to paint? Below you see my entire fleet; it only took me two hours to assemble them. Two hours, you ask? Yes, you could do it in ten minutes, but I magnetized the parts on my large battleship as it can be equipped in two variants, if you like. All this work needs some really easy filing and green stuffing, but if you glue everything directly, you're done in ten minutes.

Dystopian Wars is nice as a side project for painting, especially after a long day at work when you don't feel like messing with details on some warrior model. I decided to paint my fleet of the Empire of the Blazing Sun in gold with red and white parts, so I decided to go for a white basecoat. After that, I simply washed everything with Ogryn Flesh and a large brush in a couple minutes. 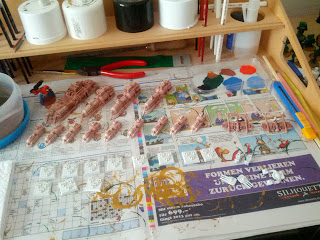 I wasn't happy with the way of handling the minis, so I went to the local DIY market and got some wood. After some white tack, my ships were nicely lined up on the wood and far easier to paint. 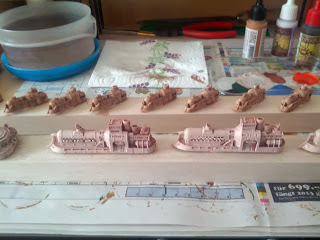 Next I generously slapped a 50:50 mix of white and gold generously onto the ships. It made them turn out white again, but with a hue of salmon pink (front row). After that, I generously applied Army Painter Soft Shade ink, which let them turn brownish again (back row). If I did NMM, it could almost pass as faded gold.

Up next I am going to drybrush everything with gold and then I will do the details.

Total painting time for my army so far: 30mins.
Posted by Unknown at 18:28

Email ThisBlogThis!Share to TwitterShare to FacebookShare to Pinterest
Labels: Dystopian Wars, Empire of the Blazing Sun