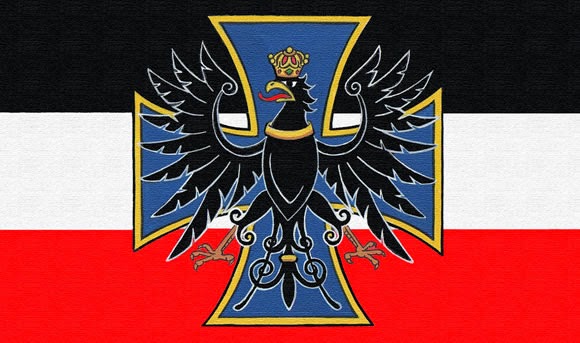 Tonight's GW game was an introduction game for +Sven Emmert who is always a great guy to have a relaxing game with - plus he's a great host. Because (or inspite?) of his heritage Sven couldn't do anything but picking up the Prussian Empire, so tonight it was the Japanese vs. the German starterbox.


After explaining the Field Orders we both decided to destroy all medium sized ships and 50% of the opponent's flotilla. We played it openly and I helped him with tactic hints since this was supposed to be an introduction/learning game - and Sven is a quick learner.

While setting up, Sven made one mistake from my point of view - he had his large battleship on his right flank, which reduced its effectiveness. On the other hand, my two wings of torpedo bombers could easily swing in on my right flank and push towards his medium sized ships.


Turn 1 already was a heated bloody mess because the table was way shorter than a standard playing table. Pretty much every ship in turn 1 could either move and shoot in range band 2 or even range band 1, so at the end of the turn the medium sized ships on both sides were gone and it was just a matter who'd be racking up the remaining points more quickly. I was leading with an advantage in points because I had already killed Sven's Geier bombers which had a decent value pointswise.


In turn 2 Sven started with his battleship trying to shoot down my DFA-170 bombers to tie on points. However, unlucky rolling on his part didn't even scratch them. In return, I moved my Sokotsu battleship six inches forward and unloaded everything I had onto his small ships on its starboard. I needed to destroy two more of his small ships and that was exactly what happened.

Looking back, I see two great points about this introduction game (on top of Sven's hospitality):


BTW, the "sea cloth" comes from GW's game Dreadfleet. I have never played that game, its cloth is quite usable and visually appealing for Dystopian Wars. :-)
Posted by Unknown at 00:02