After taking a trip to Seetroll in Konstanz, I have some more miniatures assembled for my upcoming Thousand Sons army. As usual, the rules were "no spikes, no horns, loyalist parts" to give them a clean yet slowly disintegrating look. 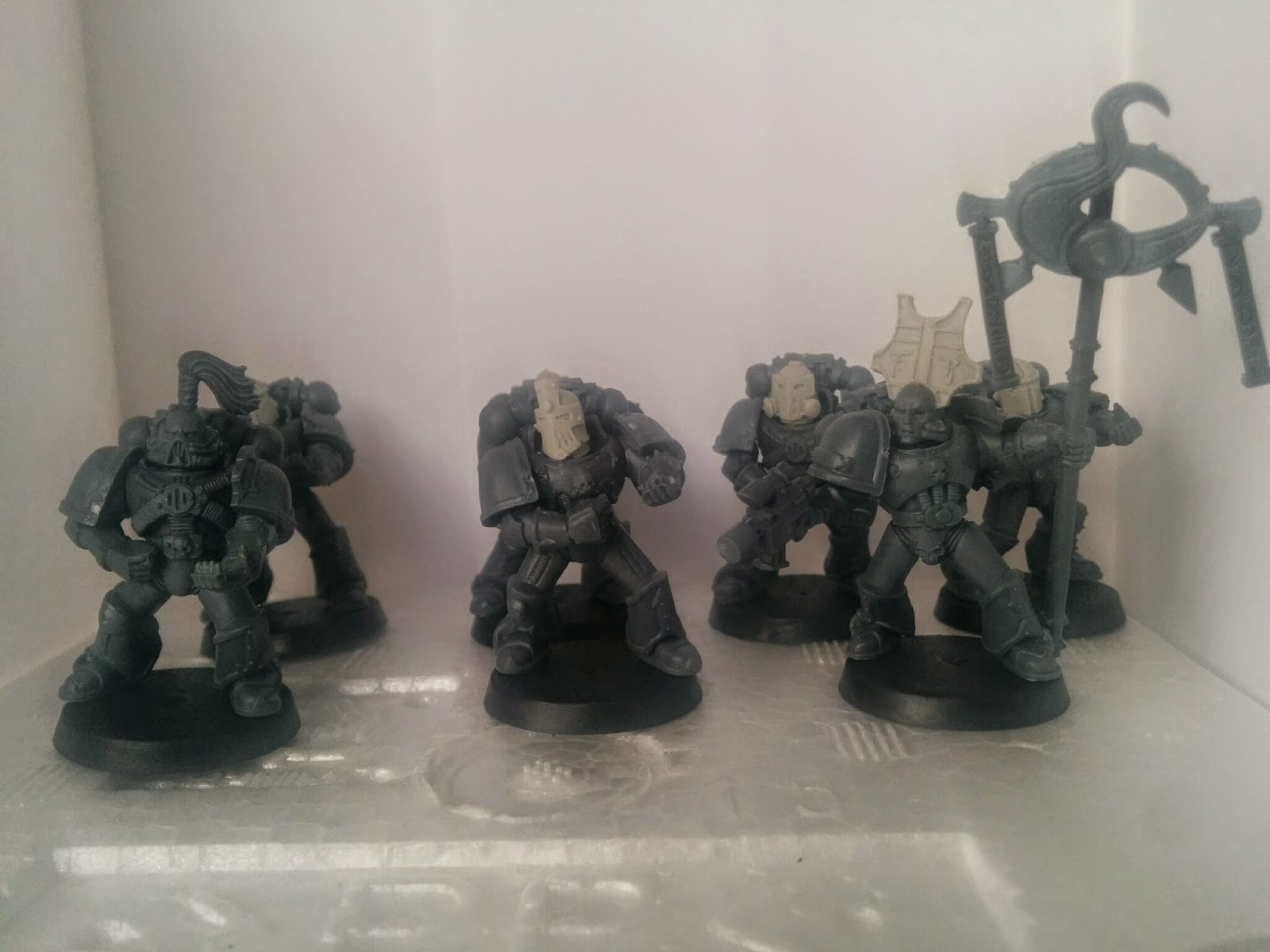 My new 2nd platoon looks a little bit more chaosy despite the above mentioned rule simply because the CSM legs and torsos have a tad more skulls. The Sorcerer (Sergeant) openly displays a Tzeentch standard from which I cut off the horns to make it look just like any other artsy standard. 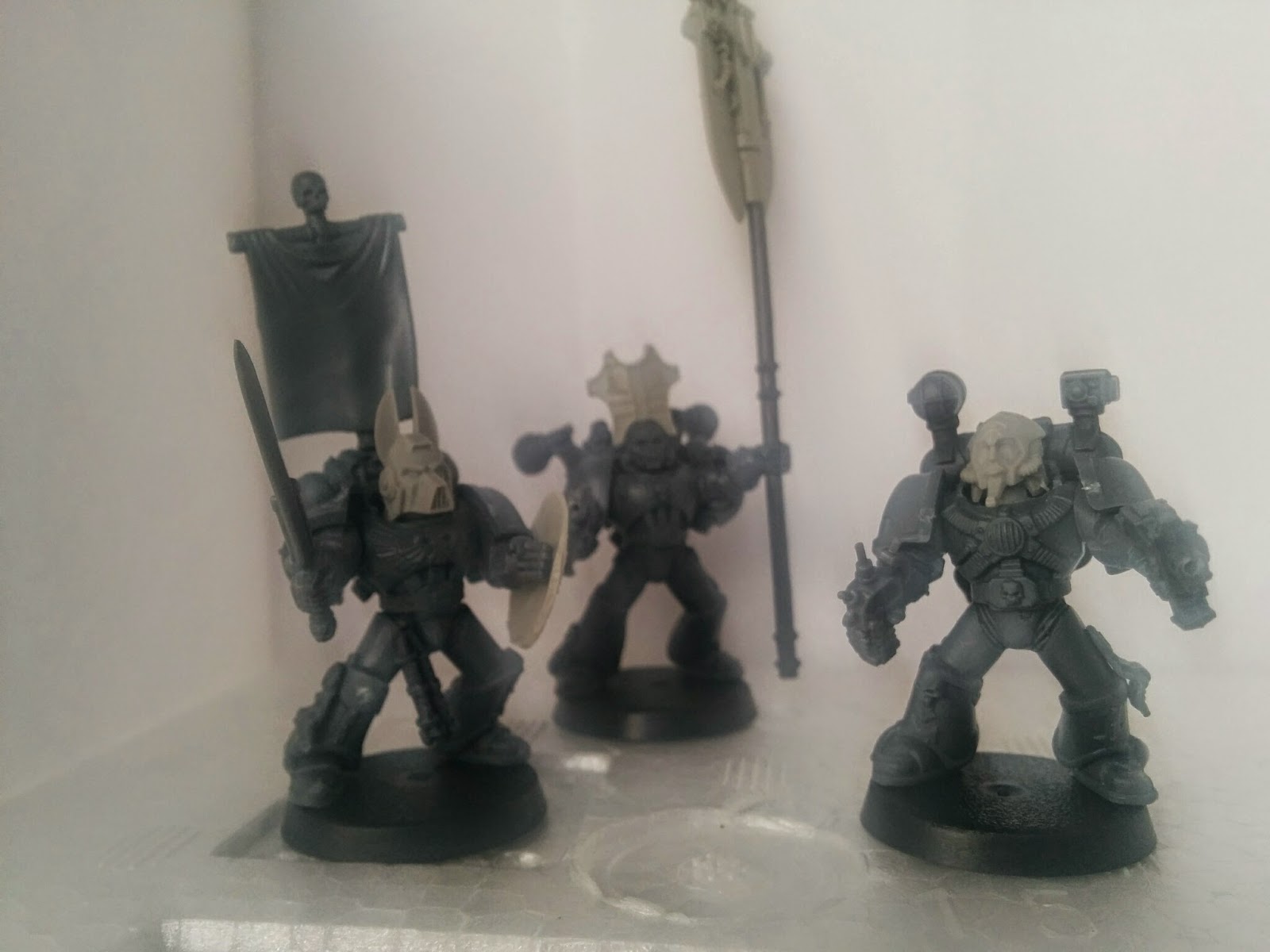 On the other hand, the Company Champion still displays proudly an Imperial Eagle on his chest armor. His Powersword is from a loyalist Assault Squad Sergeant, his shield from Scibor's Egyptian series.
The Apothecary has a loyalist Apothecary's backpack and an Auspex simply because I lack another Narthecium. I figure it's still good enough to scan the battlefield à la Leonard McCoy.
In the back you can see the Command Squad's Standard Bearer which I have shown in more detail earlier already. 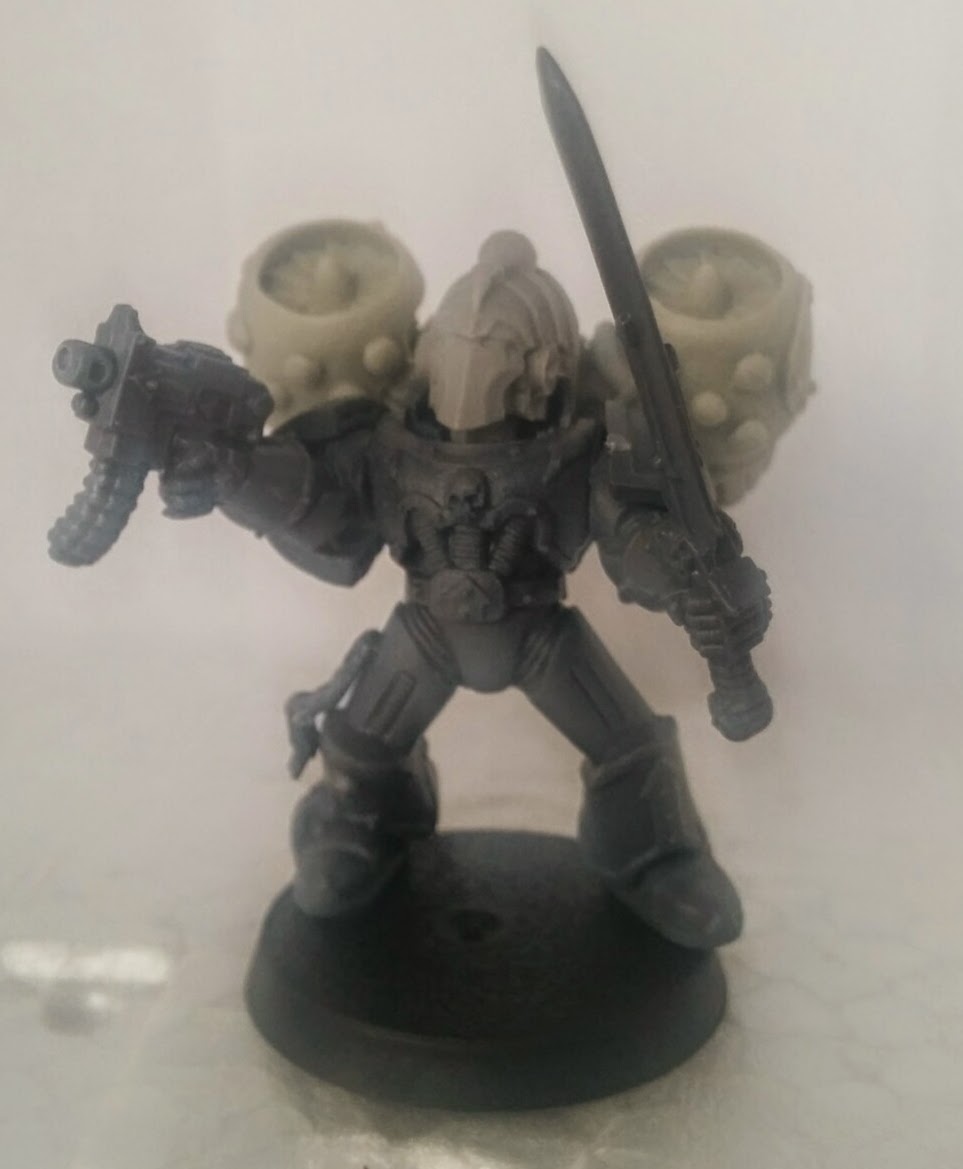 Last but not least I built a second Librarian. All his bits are from the CSM box except for his Egyptian helmet, his pre-heresy Jump Pack, and his Purity Seal (taken from a Blood Angels Sanguinary Guard box). Once again, the goal here was to create a rather chaotic yet clean look that would easily let him pass also as a feral Space Wolf or a somber Iron Hand. Unlike the Company Champion's sword out of a loyalist box, this sword here also is from the CSM box and serves just as another powerful hint about the corruption of this Librarian.

As I am too tired to write a battle report and my smartphone's battery ran empty in mid game, I won't do a proper battle report of our latest game, but just show off the most epic photos of our Blood Angels & Elysians vs. Khorne Daemons matchup.

The Story of Snubgubbin and Mission Objective 1


This battle reports covers my latest BA game vs. McMortison's Orks, both sides showed up with 1'500pts. Brother Techmarine Cephalus watched with concern the spread of an Ork infestation on Psimonis IV and decided to make haste to former Guard batiments near a strategic hilltop, but once he arrived there with his force the Orks were already at the doorstep, too.


Though I had many fun games in my life, this definitely was the most fun game ever simply because Orkz being Orkz. This could have been an entirely different game if my Melta Weapons hadn't hit their targets, Snubgubbin hadn't been such a vain pilot, and the BigMek with the Snotzogga hadn't simply walked off the field. Yet more than any victory points and tactical maneuvers I enjoyed this game for letting each army be its character: Orkz hitting like a brick but with their usual discipline problems, Marines being the few and elite who wouldn't break even in harshest conditions.

As I wrote this battle report, every second of the game bubbled up again and this probably was the quickest battle report ever written by myself, so you can take this as an indicator how much fun the game was. All rewards belong to McMortison for hosting this game and for being the awesome sportsman and fluff nut that makes any game with him an experience of its own.
Posted by Unknown at 09:34 No comments: