After the latest encounter with the Iron Warriors, Brother Techmarine Divico moved the remnants of his warhost into a ruined ancient city in the hope to find cover until reinforcements arrive. Unfortunately, although the Blood Angels moved swiftly, the Iron Warriors didn't lose their trace and soon opened a new torrent of fire. 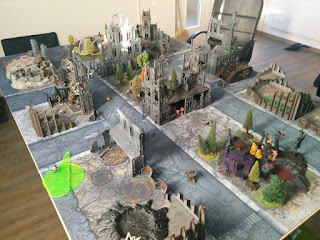 This is how we set up. On the closer edge of the table you can see my half where two units of sniper scouts can be recognized with their yellow camo cloaks. I placed everything else in reserve in hopes to minimize the damage done by the Iron Warriors' fire power. Unfortunately, I was immediately to realize that this was a grave mistake. Sin's warlord trait allowed him to Infiltrate with three units, so because I had no units on the table, he could place them anywhere, i.e. on the mission objectives (MO) midfield. Once it was my turn to infiltrate with my scouts, I could only occupy the two MOs they are currently sitting on in the picture above.

I managed to seize the iniative, but the Scouts' missile launchers (ML) proved to be of no value against the heavily armored tanks. Therefore, the game quickly moved on to Sin's turn 1; I didn't even take a picture of mine.


Once again I had an awesome evening with Sin despite my terrible defeat - it's because he's such an awesome guy to play with that the score doesn't really matter. Yet it is obvious I still make many terrible mistakes, especially my bad decisions during pre-game made me essentially lose the game. And the Death Company playing sitting ducks for one turn without doing anything - this was basically 400 points thrown out the window.

For this game, Sin already toned down his list by removing the Basilisk, but for the next game he will leave all his armor at home, so it will be about infantry vs. infantry and we'll see if that tilts fortune to my favor.
Posted by Unknown at 22:49