A classic coming back: first Blood Bowl game after 20 years

To be honest, I wasn't too excited when I heard that GW is having another Blood Bowl release. After all, I still have my starter box & Death Zone from 1994 (3rd Edition), the game was never played in my current gaming group and if I happened to be unlucky, GW could invalidate quite a bit of the things I own.
That being said, I had a blast last night giving an introductory game to my buddy Tudesauce and his Dwarfs team. But let's head over to the arboreum and see how the game developed.

"Good evening sports fans and welcome for tonight’s Blood Bowl pre-season matchup. This is going to be a special night, Jim, isn't it?"
"Indeed, Bob, for it will see the return of the Lar Guardians after their 20 years hiatus and they will take on no one less than the Barak Varr Black Dragons, one of the most promising Dwarf teams as of late."
"And there we have a kick-off. Zafiriel with the catch, elegantly handing the ball to Garfindel."
"This team clearly doesn't play for their first time Bob."
"They clearly don't, Jim, but now Garfindel is looking for a catcher."

"Movement on the right side. Ulminiel is trying to break through, but the Dragons' defense paid attention. Ulminiel goes down and is being pushed into the crowd!" 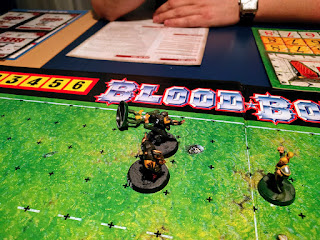 "But the Guardians offense regroups, movement on the left side, Garfindel throws the ball to a wide open #7."
"Number 7 is Trabanoniel from Elmwood City, he was the 3rd pick in the 2497 draft, but failed so far to produce any spectacular results." 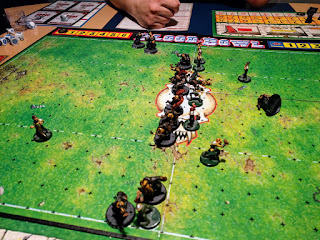 "Trabanoniel has spurred the Dragons' defense into action. Number 11 with the blitz! Trabanoniel down." 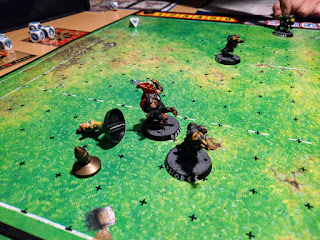 "It doesn't look much better for the rest of the team, Bob."
"Indeed it doesn't, Jim. Those Wood Elves will be lucky enough to survive the first half of the game." 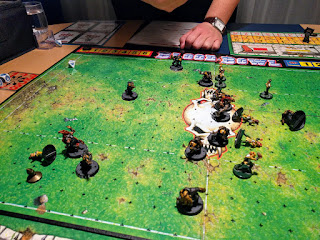 "Trabanoniel gets up, evades the hands of his chasers and goes for the touchdown!" 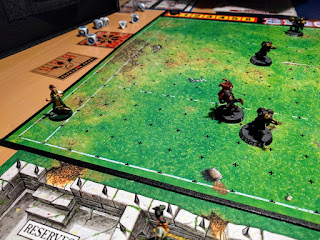 "Finally we get an idea why Trabanoniel was 3rd pick, Bob."
"We hope for many more evasive moves indeed, Jim. But now we have our next kick-off." 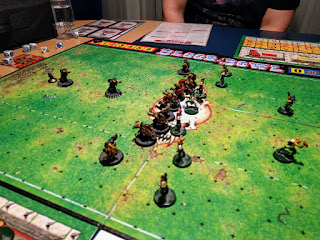 "And the ball is long. Let's see if the Dragons are able to waddle it all across the field."
"Well, the Guardians's defense doesn't look very solid to me, Bob."
"It sure doesn't, Jim. Two players injured already." 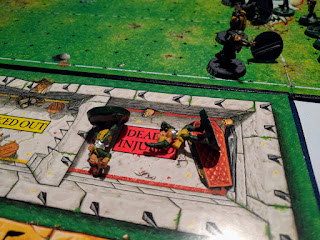 "And there we have Sparky picking up the ball. Go Sparky!"
"The Dragons are doing a great job at the line of scrimmage, those Elves are being pushed like leaves in the wind." 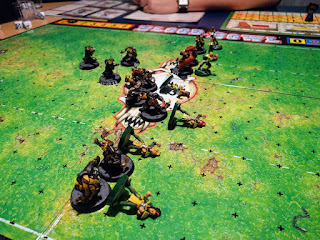 "Sparky at the 50 yard line, well protected by his brothers. Can he really pull this off?"
"Sparky is a substitute for Grimdor who still needs to recover from the Boiler Plates' swamp troll, but what Sparky delivers today seems promising." 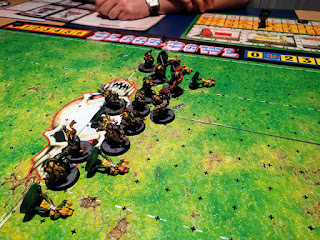 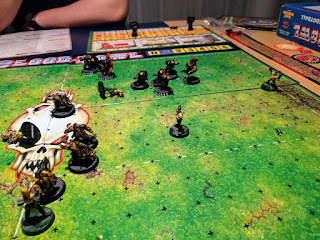 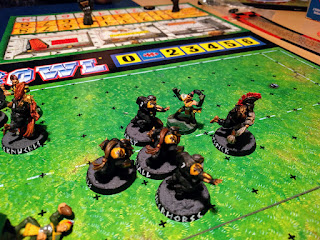 "But Sparky doesn't care, Bob! Touchdown for the Dragons!" 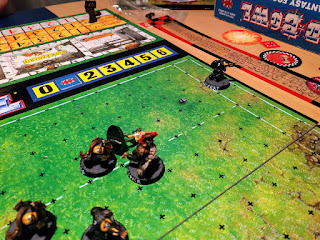 "Quite unexpectedly the score is tied, Jim. Who'd have thought of that?"
"It's still not over, Bob. The Dragons with the kick."
"Garfindel gets the pall and passes to Bindaniel. But Bindaniel is left hanging in the Dragons' defensive wall." 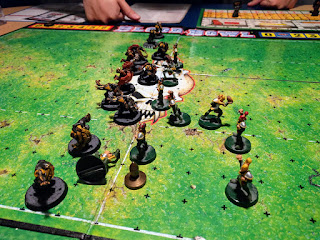 "Bribundoniel comes for the rescue. But what is he doing, Jim? He's running to his own end zone!"
"And the Lar Guardians are forming their legendary tree wall, Bob. Why that? It's their offense! Have they completely lost their mind?" 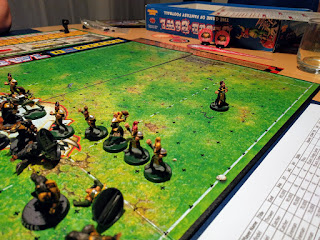 "But what's that, Jim? On the other side of the field, the Guardians' #5 is knocking over Nails, last years' Dwarf runner with the most yardage!" 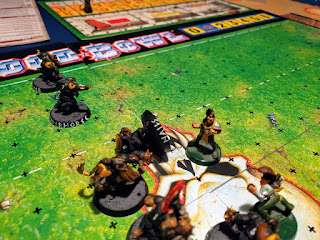 "Aaaand this is it. The referee manages to whistle just before being carried away by a bunch of Trollslayers. I don't wanna know what will happen to him, Jim."
"Neither do I, Bob, neither do I. So this is it for tonight's broadcast and we hope you'll tune in again next time when we'll have the Shetland Bucaneers vs. the Marauding Oldboyz. Thank you and good night."